…and many other emphasized the importance of decisiveness especially for those who have authority.

Brian Tracy said “Decisiveness is a characteristic of high-performing men and women. Almost any decision is better than no decision at all.”

It is true that decisiveness is a virtue that every professional must have to be successful. However, the question is: at what point in time should you make a decision?

Scrum Framework encourages you to delay your decisions until the very last moment at which it would be irresponsible not to make a decision. This is a well-proven strategy to avoid risks. Decisions made prematurely and too early pose risks for the success of the project because the early decisions often result in throwaway work. Early decisions are made based on early data or ambiguous information. As the teams progress through their iterations, more information becomes available. Having more information and less ambiguity gives you an opportunity to make a more informed decision; a better decision. 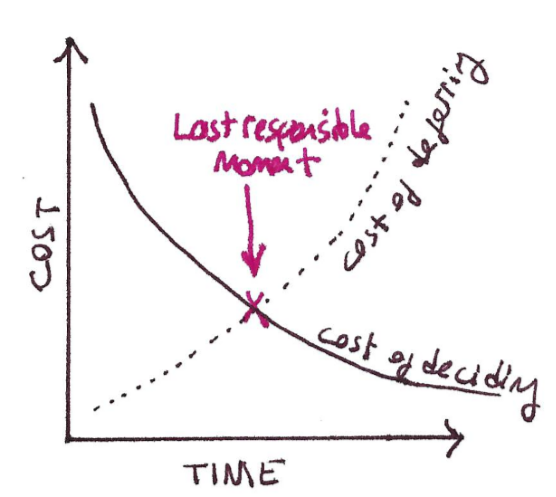 Scrum recommends all Scrum Masters, Product Owners and Team Members to defer their decision until the last responsible moment. So that you can keep your options open and make the most informed and the best decision you can.

- Share with your friends or followers.
Browse Other News and Articles

Help us get better!

Even though we use the latest technology in machine-learning assisted natural language processing, we still cannot match the skills of humans. Do you think there is a better translation?

Welcome to local edition of ISA

Even though we use the latest technology in machine-learning assisted natural language processing, we still cannot match the language skills of humans. Do you think there is a better translation? If you see any translation mistakes, please right-click on text and suggest your corrections. Thanks!